The ugly addition that once served as 400 square feet of wasted space has finally been thrown away. Literally. Trent and a beast of a man named Santiago, completed the demo job late Saturday afternoon. If you are curious why we would throw away 30% of livable house, here are a few reasons
1: The ceilings were extremely low in the entire addition, and only 6.5 feet tall along the wall by the windows. We have friends that would not have been able to stand there!
2: There was not any AC run to the addition so it was extremely hot in the afternoon when the sun came in.
3: Electrical was only run for 1 light fixture in that big, long room.
4: It stole all the natural lighting, leaving our living room and kitchen with none.
5: It left us with a tiny back porch with a ceiling so low that the average person would run into the ceiling fan.
6: It was an eyesore from the outside since they did not attach it to the existing roofline properly.

That’s a pretty exhaustive list, huh?! That addition almost kept us from buying this house. We knew that we could transform the rest of the house since it had good bones. The addition, not so much. Trent ultimately decided that the addition had to be demoed, and was able to use his persuasion skills to convince the realtor and sellers that the addition shouldn’t be counted as priced square footage. Luckily for us they listened, and the rest is history! Trent’s areas of handiness are endless, I tell ya!

Here are some pictures of the addition before: 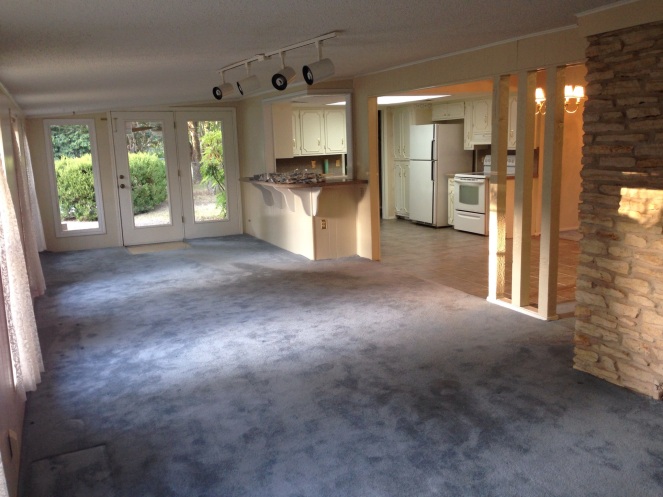 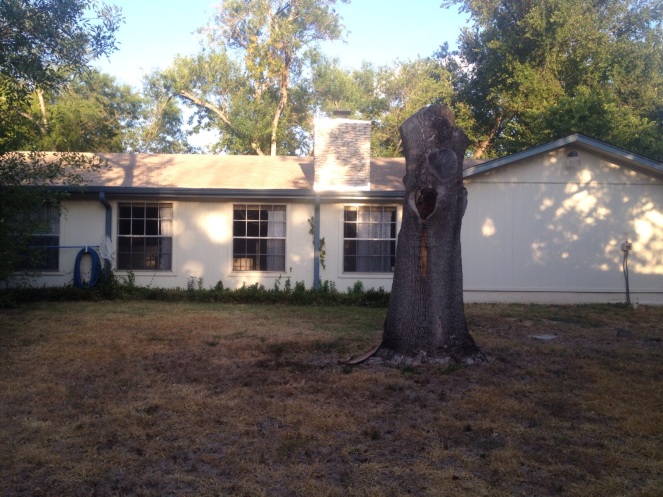 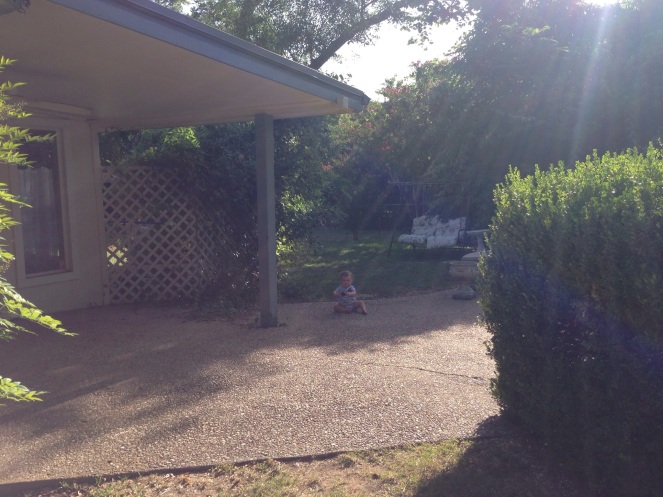 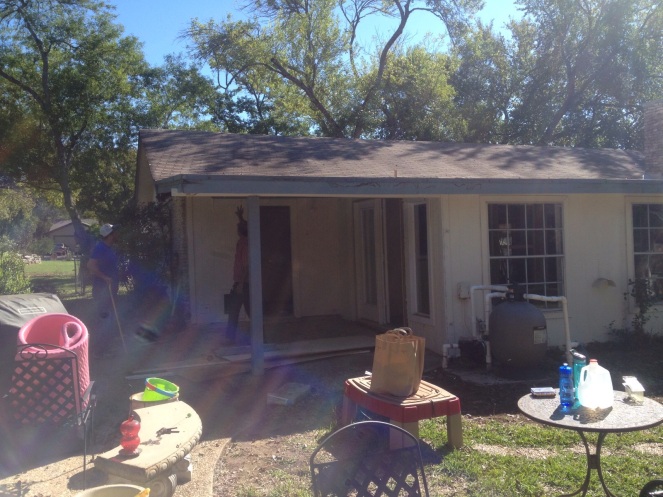 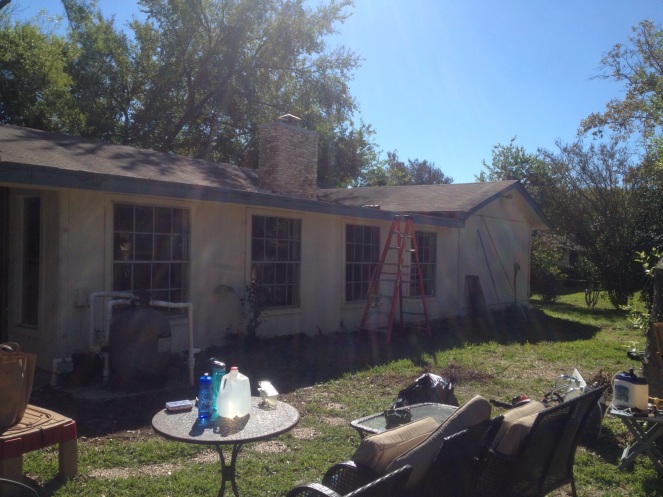 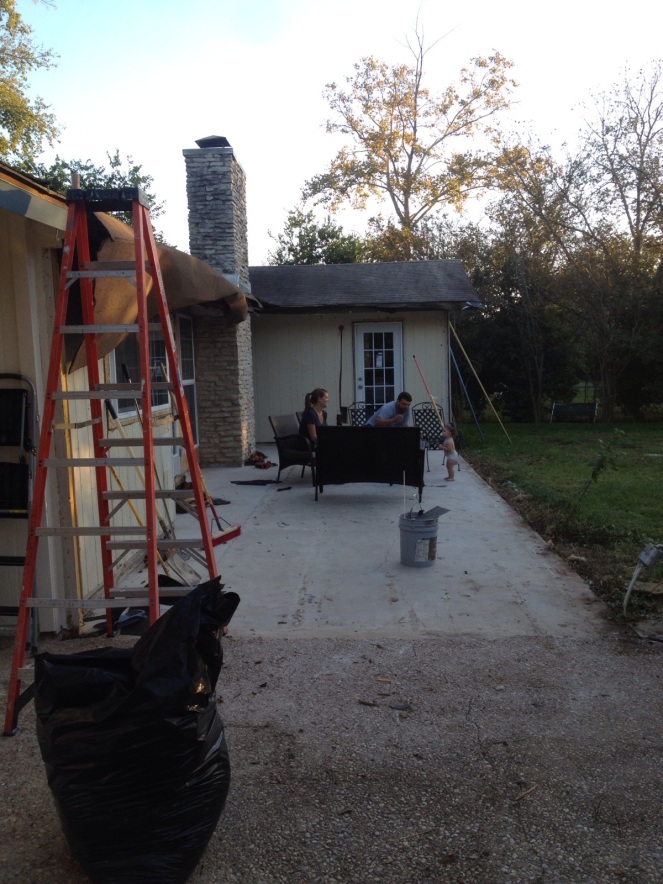 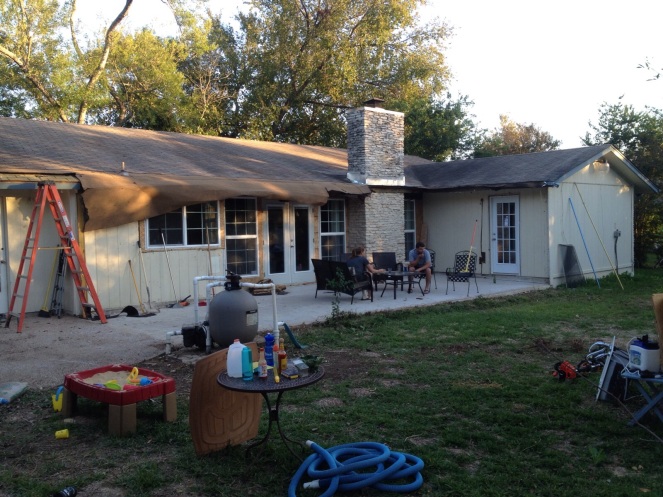 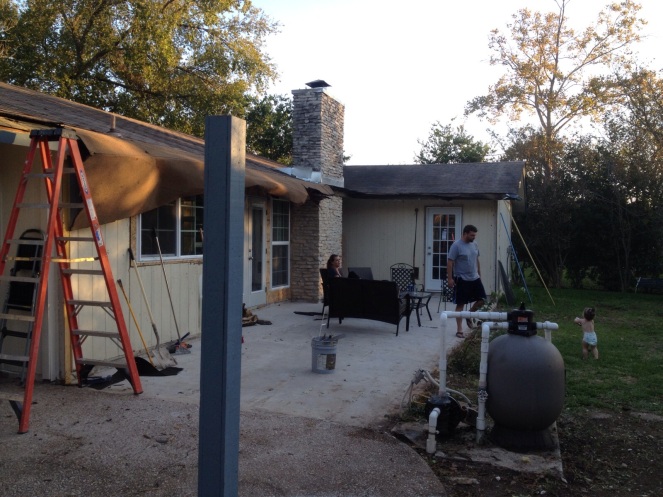 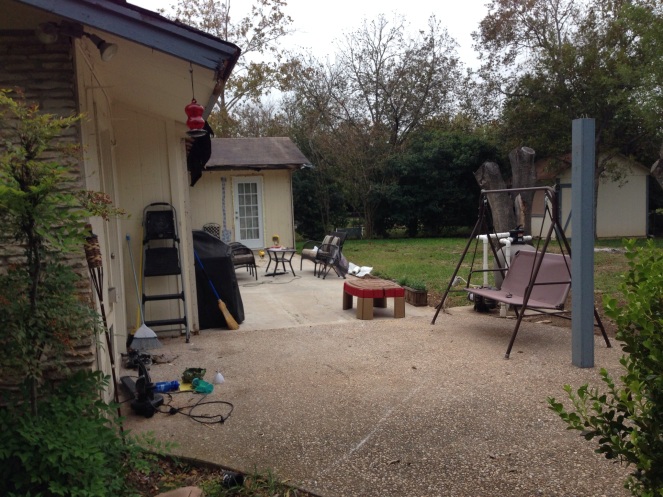 We are so very glad that that project is done, but it’s completion has brought on new projects as per usual. We need to install weatherproofing, siding, new roofing and Fascia and Soffits along the entire backside of the house. We worked hard last night to get open areas secure so that little critters don’t seek shelter in our roof during the cold front. Fingers crossed that it’s sealed up good enough!

Since the addition has been removed I have fallen in love with this house all over again. The transformation here has been unbelievable and I’m blown away every time we complete a new project. Even so, there has been the lingering issue of poor natural lighting. I am a HUGE fan of natural lighting, and prior to Saturday the backside of our house was a dark dungeon. I knew the issue would get better once the addition was eliminated, but couldn’t imagine it would get this much better! 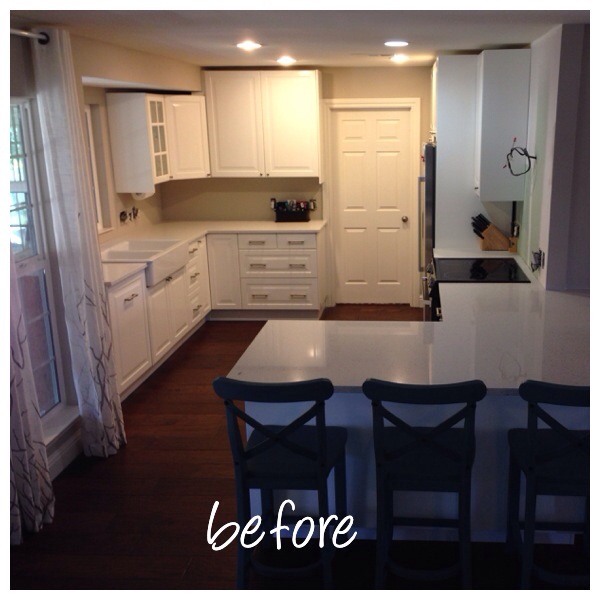 As you can see, the lights are on in the before photos and off in the after photos and the room still looks WAY brighter! Speaking of lights, did you notice the under cabinet lights and pendant lights that Trent installed? Both new additions to our humble abode!

I have been on the hunt for a buffet/China cabinet to fill the space between our dining room and bar, and finally found the perfect piece! We quickly claimed this little gem at $150.00 on Craigslist! It was a family heirloom from the 19 something’s and it’s owners were downsizing. It was in great condition but begging for a coat of chalk paint, and I was the woman for the job! 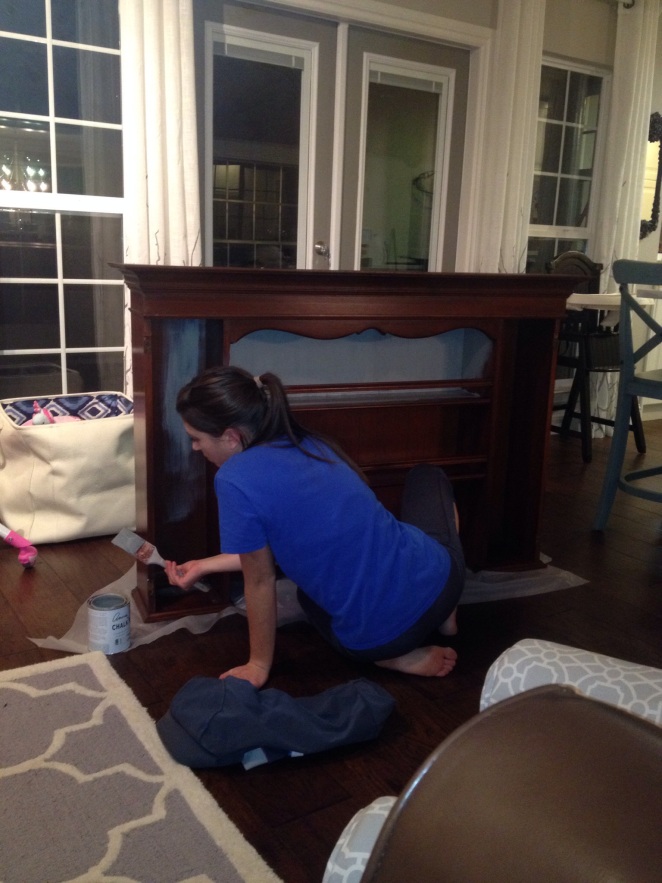 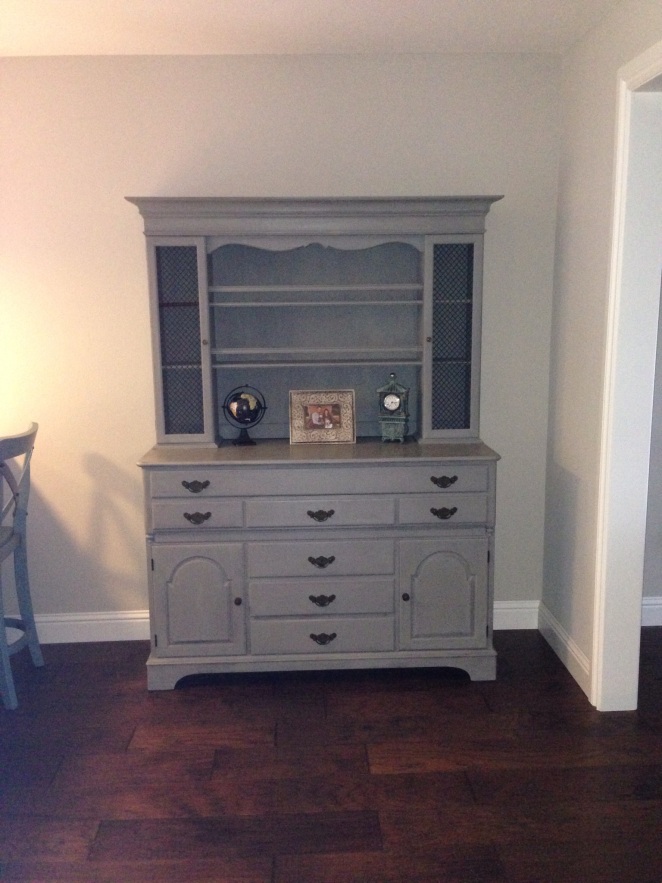 If you haven’t used chalk paint, you are missing out. It is seriously the easiest way to transform a piece of furniture without all the trouble of sanding and priming. So go get some and paint something :).

Trent is a bit of a pyromaniac, so he started a few fires around the house. Since we are not in the city limits, we have the luxury of starting fires in our backyard as long as we are not in a burn ban. Thank goodness we got some rain last week, because we had piles of tree limbs and brush everywhere that were waiting to be burned. 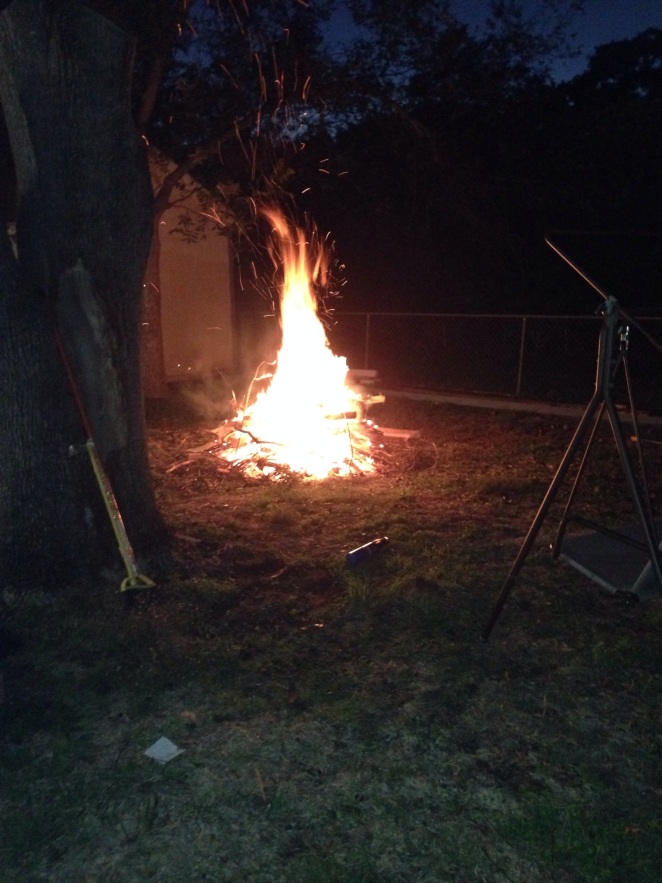 The other fire was in our fireplace! We are loving it and the fact that a cold front blew in today! 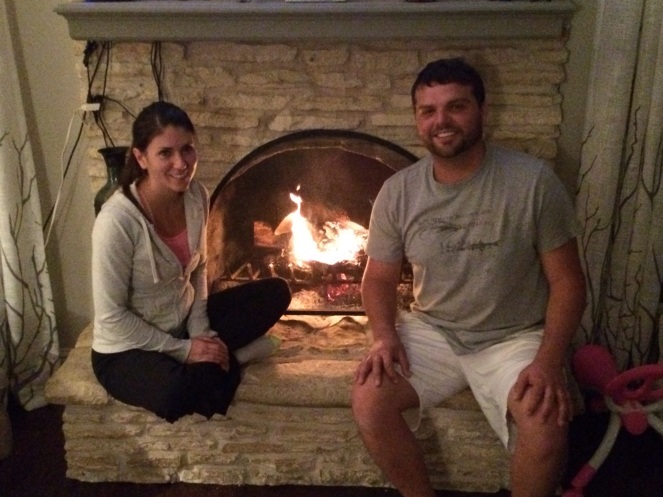 Pardon all the wires hanging down the fireplace. That too is another project :).